I've been working on Sheila's house; specifically the living room.

We started by painting the entire room navy blue, specifically Noir by Pratt and Lambert.  It almost drove the painter mad and I feel for John, but it had to be done.

This summer and spring I've been working on draperies for the wall of windows.  The fabric is Irish Linen.  And I know now that I'm definitely not set up to sew draperies that are as long as these.  I tried using the floor, a table and the clothesline to cut them out.  Arggggh.  What I wouldn't give for a cutting table like real workrooms have.  Joel suggested I could set up my own sweatshop out in the garage and sew for other people.  There isn't enough money and I'm not hungry enough for that at this time. 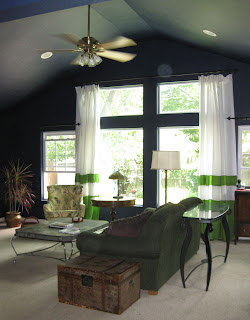 So here are the middle panels installed.  I'm still working on the two side panels which are easier to deal with because they are significantly shorter and only have the green panel on the bottom - without the center band of the green.  They are made with French seams throughout so that they are finished on the back because they are not lined.  If I'd lined them I never would have finished them because I would have died trying to square everything up and then IRON them.  And that probably would have been at my own hand...

Please note Sheila's collection of muertos.  The big ones on top of the armoire are fabulous; I especially like the lady (called a Katrina) holding her blue skirt in both hands.  They're all beautiful, though and really show up against the blue walls.
Posted by Decorina at 9:01 PM 1 comment:

I've been messing around with Adobe Photoshop all day.  Little enough to show for all my effort, but here is the latest with Jimmie.

If you will refer to previous posts you will see him as...well, I don't know what it is exactly that he looks like breed-wise without a haircut.  A little bit of everything, but probably Pug and some Yorkie.

So I took him to the beauty salon and I got back a little, sort of, schnauzer. 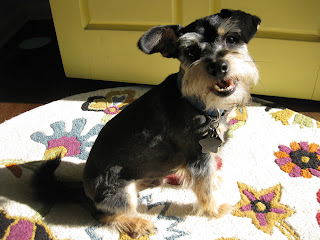 The plants around the front path, from the driveway to the front walk, are maturing somewhat.  The lavender is full of bees and butterflies and the daisys are just getting started.

Here it is before we constructed the gravel path: 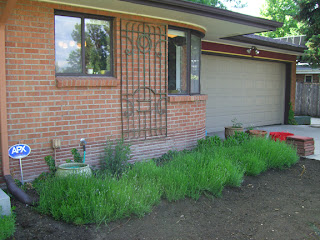 And here it is this morning:
﻿ 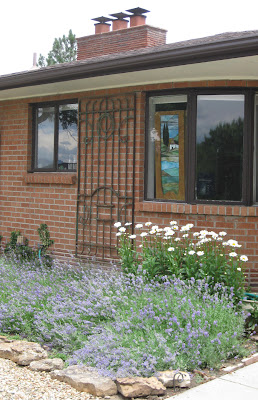 I'm so slow at this.  I've been painting and redecorating.

The living room has had its previously all brick fireplace painted white.  It is vastly improved and I don't have to look at the ugly raw brick with its curtain of water stains from a roof leak. 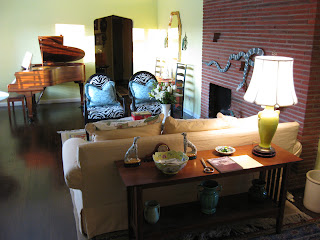 And then the after: 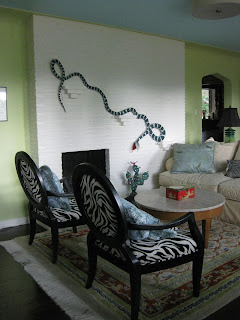 I couldn't be happier with the results.  And so happy to be happy with it because there is absolutely not a chance of going back to brick.  It has taken weeks because of the rough brick, its porosity and the requirement that a full primer coat had to be applied.
So what do we think?﻿
Posted by Decorina at 1:43 PM 2 comments: