I wrote this back in 2011.  Just now getting it posted as a "preview" because I have actually done the work now.  Draperies are still under construction as I decided to interline them...and that will take some time and trouble.

Since I've been spending hours and hours in here, this room needs to be fixed up a little.  First up:  Paint on the dreadful paneling.  It is oppressive and just...too brown for its own good.  It will be painted.  As will the brick fireplace.  Sayonara to all of you brick and brown.

I took this the day we looked at the house for the first time.  The previous owners struggled with furniture placement, window treatments and light fixtures.  The blood red carpet in this photo was removed the first night we slept here (the day/night of closing).  The pinch pleat draperies over the planter/window left the same day.  It is hard to see, but the ceiling is paneled with 2' squares of mahogany with each one turned 90 degrees to its neighbor.  Their TV is sitting on a built-in thingy with a white plastic laminate top. 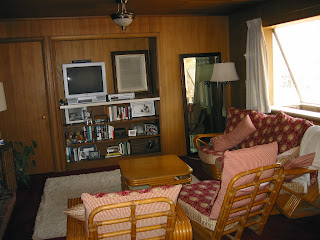 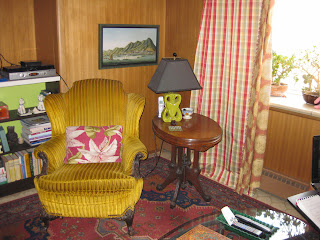 Back to before...This corner shows my plaid/toile draperies made for our rental house in Denver.  Oddly enough they fit (with rods) on the windows formerly covered with the pinch pleated numbers I threw in the trash.  They also strangely resembeled the upholstery fabric on the rattan sectional that the former owners had in this room.  You can also see a corner of the built-in bookcase.  I've painted the back of the shelves green...and the rest of the bookcase dark brown.  It wasn't enough to save it, though, and after listing it on Craig'slist for a few weeks with a tanking price I gave it away to the first guy to show up with a truck that could haul it away.


A note about the gold wing chair:  It (and it's matching brother) still have the tags from my mother's reupholsterer in Phoenix who recovered them for her in this cut pile stripe in 1973!  And while the whole green and gold stripey thing screams 1973 I must admit that they look pretty good after 40 years... 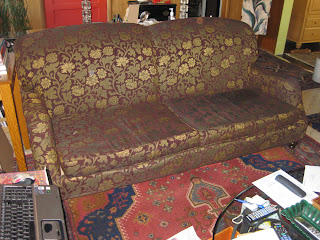 And here is the sofa that I laid on for months and months. About 36 weeks I think. I especially like the sagged out front edge under the cushion. I logged far too many hours and days on this sofa to remember. Not a happy time. Way too brown for one thing.  I loved this Robert Allen fabric and ordered the sofa from Lazar.  It was supposed to have a self deck but you can see the muslin peeking out on the left side.  A couple of years ago I had the cushions remade with extra fabric, but they are too shallow and aren't holding up.
Then there is the broken down front edge on the right side of the sofa...very not good.  Mr Perez had to rebuild that bottom front deck edge.  He also had to reconstruct the cushions.  It isn't brown any more either.
The rug has been moved to the front bedroom and a new seagrass rug was ordered.  Progress is being made.  The colors are all new.  After we had primed (using white primer) all the wood and brick (on the fireplace) we were blinded when we walked in this room one morning.  The cave had been vanquished.

A humanoid is not available to take your comment. Please leave a message with the robot after the beep. (Beeeeep)